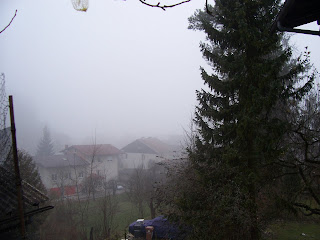 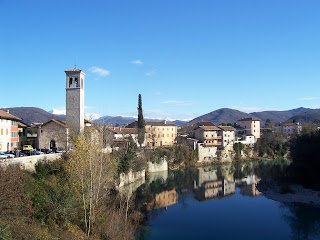 Not much actual news to report from here. Two days before Christmas we took a short trip to Cividale (in northern Italy, about 2 hours away), where we were – thankfully – out of the fog and cold at last! It was fantastic to enjoy the sun again. We brought Lucy with us and we stayed at a small agro-tourism place called Ai Casali, which is located about 3 kms outside the center. It was nothing special, but it was nice. They have both rooms and apartments to rent. It would be more remarkable in summer when you could use the pool outside. It’s also good for kids, with some swings and a few animals you could pet/play with (dogs, goats, ponies).


Cividale is a great old city, built on top of Roman building sites. A lot of Roman-era mosaics, jewelry, weapons, and other finds are housed in a very worthwhile archaeological museum in the center. Also worth visiting are the bakeries – yum! The local snack is a cake/bread called gubana, which is filled with raisins, cinnamon & other spices, walnuts, grappa, cocoa, etc. It is made in a roll, and this roll is then coiled up, kind of like a snake or a turban shape. Although I am sure lots of people make it at home and have their own twist on the recipe, Gubana has its own consortium to ensure that all commercial producers remain true to the original recipe and maintain specific quality standards. It is especially popular at holidays. I cannot confirm, but I think the recipe may have actually originated on the Slovene side of the border, with 'gubanca' being the version on the Slovene side -- 'gubanca' means "wrinkled" for the wrinkled, layered dough.

The area is also known for its white wine, so of course we stopped and bought some “sfuso” on the way home (this is the wine we buy in bulk – ‘sfuso’ just means ‘loose’ and it is the table wine they sell by the liter instead of bottled.)

Not that I am biased (well, maybe a little) but the landscape is a lot prettier on the Slovene side of the border. Cividale and its immediate environs are very flat and not terribly interesting, except for the mountains in the background. So we made a few stops in Goriska Brda just to enjoy the sunshine, and then we continued home. Of course, as soon as we got within 20 kilometers of Ljubljana, we hit the ever-present Wall of Fog. (*sigh*)

Christmas Eve we spent in Naklo with Ernie and Jozi and their families, and that was a lot of fun. We ate lots of different kinds of seafood, from sushi to shrimp to scungilli salad. Christmas Day we spent with one teacher we know from school, who coincidentally is dating a woman who used to live in the apartment next door to us (so we knew her already). Most of the people at that party were from Australia and were not people we had met before. We ate pork ribs, chicken, some deep-fried potato/veg balls, different salads, pasta, and some home-made ice cream.

I will leave you with best wishes for a happy and healthy 2009, and an Italian recipe designed to ensure riches in the coming year:

COTECHINO WITH LENTILS/
COTECHINO CON LENTICCHIE
Recipe by Mario Batali
This is the most traditional dish of all for New Year’s Eve supper. The lentils represent the coins soon to come to all who consume the dish within an hour of midnight.

Makes 4 servings
Ingredients:__8 ounces dried lentils_2 cloves garlic, peeled_12 fresh sage leaves__ cup extra-virgin olive oil__ cup red wine vinegar_salt and freshly ground black pepper_1 large (about 2 pounds) cotechino sausage
1. In a medium saucepan, bring 6 cups of water to a boil, and add 1 tablespoon salt. Add the lentils, garlic, and sage. Cook the lentils at a gentle boil until tender yet still firm, about 20minutes. Drain and place in a medium bowl.
2. Add the olive oil and vinegar to the lentils and season with salt and pepper. Set aside.
3. Prick the sausage several times with a pin. Place in a large pot of cold water and bring to a boil over medium heat/. Reduce the heat to a very low boil, cover the pot and cook for approximately 1-1/2 hours. Drain.
4. Spread the marinated lentil on a large serving platter to form abed for the cotechino. Slice the cotechino into rounds, arrange over lentils, and serve.
at 11:31 PM No comments: