This was my ride home from my morning class today.

I was on one of the older, presumably commie-era buses, in the middle of a snowstorm on unplowed city streets.


My drive home from my late afternoon class some 60 kilometers away and in my own vehicle was not much better. Except I was inside the rollerskate itself.

But, all's well that ends well, as they say. 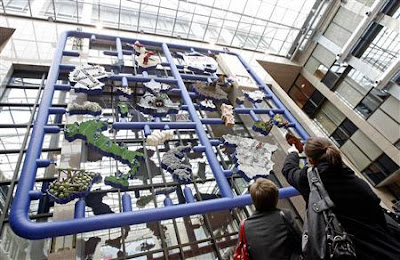 It looks rather like a giant version of the plastic sheet of figures that you must detach from their holder when you buy a new board game – the game RISK for example. And risky is what this new art installation may be.

“What new art installation?”, I hear you asking. I am talking about the new exhibit recently unveiled at the Justus Lipsius building in Brussels, where the EU's governments meet. This work was commissioned to recognize the Czech republic’s 6-month tenure as President, effective at the beginning of 2009.

Mounting some form of display is customary when taking on the rotating EU presidency, but normally they are uncontroversial. For example, Slovenia now has a small sculpture park not far from the main bus station; each meter-high stone obelisk is carved with a symbol representing each EU member at the time of Slovenia’s presidency. Not only it is not controversial, I would be willing to bet that 98% of Slovenes don’t even know it exists. The only reason I am aware of it is because I walk past it on my way to my dance class … after all, if a group of stones arranged in a somewhat Stonehenge-fashion suddenly appeared in a small clearing on a street corner near you, you might also stop to investigate it further. (Or maybe not. Perhaps that is why Stonehenge itself remains such a mystery: no one bothered to ask what the hell it was.)

But this new piece in Brussels was not installed quietly. In fact, it took three trucks to transport it from Prague to its new (temporary) home in Brussels.

Commissioned some two years ago by the Czech government, the work was purportedly a representation of EU members as seen through the eyes of 27 artists (plus Czerny) coming from those countries. But it didn’t exactly turn out as described.

For purposes of clarification and blame-clearing, the contributing artists were quick to point out that the piece was not intended to represent Europe as seen through the eyes of the Czech presidency. Why the hasty exoneration, you might ask?

Let's begin with those 27 pairs of eyes, allegedly belonging to 27 artists whose works supposedly represent their impression of their respective countries. Well, they were actually more like three or four sets of eyes representing -in some cases- an outsider's view…. In actuality this work was the brainchild and product of Czech artist David Cerny and some of his friends/colleagues. Not even the Czech government was aware of the actual contributors (or even the exact content of the piece) until the artist himself was willing to reveal it.

In a foreword to the exhibit's catalogue, Cerny said the projects "share the playful analysis of national stereotypes as well as original characteristics of the individual cultural identities." (Read as “we are taking digs at what each country really thinks of itself, and others think of it – we hope that you can laugh at yourselves as much as you will laugh at all of the other countries.”)

Cerny went on to say, “We knew the truth (about the actual artists behind the project) would come out, but before that we wanted to find out if Europe is able to laugh at itself." He added that Entropa, which is the name of this piece, "lampoons the socially activist art that balances on the verge between would-be controversial attacks on national character and undisturbing decoration of an official space".

However, some people may be upset. We'll see. Because....

Sweden is represented by a flat-pack carton, a-la-Ikea. Ultra-small, ultra-rich Luxembourg is a golden nugget with a "For Sale" sign prominently attached.

Are you laughing? Of course you are. Unless you happen to be from (insert your EU country name here).

Denmark is made of Lego bricks. Finland is a giant expanse of wooden floor. Germany is covered by a haphazardly interlocked series of plastic tracks of roadway (think: autobahn meets Hot Wheels). Hungary is a bizarre “atom” comprised of melons, nested atop a bed of peppers. Ireland has usurped one of Scotland’s national symbols and is shown as a giant set of bagpipes (albeit high-tech bagpipes).

Britain, as one might expect, is not present at all, with artist Khalid Asadi choosing to express himself through the use of “free space”.

The Netherlands are submerged in seawater, with only the tips of minarets left exposed (awash in a sea of religious controversy? You be the judge.)

Italy is a giant football/soccer pitch complete with players, and goal posts standing at either end of the country.

Estonia has a hammer a sickle (each made of power tools). Greece is burning. Lithuinia is represented by five guys in army uniforms peeing across the border onto its neighbor, Russia.

Romania is a Dracula-based theme park.

The Czech representation features an electronic message board, similar to those on the highway that say OBSTACLE ON SHOULDER or CONGESTION AHEAD. Except this message board scrolls various statements made by notoriously anti-EU Czech president Vaclav Klaus, who has in recent days embarrassed the Czech government by criticizing the EU's new Lisbon Treaty and scoffed at the notion of climate change. (Subtext by artist Cerny reads, "He is OUR president. We elected him, so let's show him off to the world with joy in our hearts. He's not just a skier. He's a great guy!")

Side note: Can you imagine if there had been an LED message board in the shape of Curious George with a rotating series of Bush-isms blinking along the brim of his ten-gallon hat? Oh, the laughs we could have had…

And of course, we cannot leave out Slovenia. “Slovenia’s” description of its portrayal is not for the prudish, and gives a whole new meaning to the word “member” country. Slovenia's contribution is a 3-dimensional outline of the country, as if carved from stone, inscribed with the claim, “First tourists came here in 1213.” (note the verb and read on…)

This statement ostensibly celebrates a claim by the Slovenian National Tourism Agency that the first visitors to the country were tourists, who visited Slovenia in 1213. Apparently, like many tourists of today, they went to Postonjska jama, left some graffiti in the general area, and then departed – never to return. "We view ourselves from the position of foreign visitors," says the text explaining the Slovenian piece. It adds, helpfully: "This is a strategy associated with the delight of masturbation: We view the hand we use in autoerotic stimulation as the hand of another. We view our own national identity with similar detachment." (I personally must comment that it is somewhat true that Slovenes seem to view themselves through the eyes of others, especially in matters of national self-worth.) That being said, I am not yet sure how Slovenes feel about this portrayal, but presumably if they are offended they will, err… take matters into their own hands.

If you would like to know more, or see the countries’ representations that I did not mention in this entry, download the PDF, which can be found here http://www.vlada.cz/assets/media-centrum/aktualne/entropa_1__1.pdf

Oh, and in case you didn’t figure it out, Belgium is a giant box of chocolates.
at 7:33 PM No comments: